I have been decorating for Halloween for a few weeks now. I definitely think it is time to admit that I have a problem. I'm addicted to DIY'ing. It is so easy, cheap, and so much fun.

My days are spent looking up crafts to do. Dummies are something I have been wanting to attempt for awhile now. As far as directions go, I just jumped in with whatever I had and hoped that it would turn out ok. 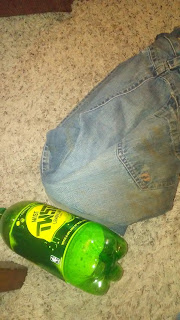 For this one, I used a variety of things, you can use anything you have, that works with the craft. What I used:

Like I said, you just have to wing it and do whatever works for you and your dummy. 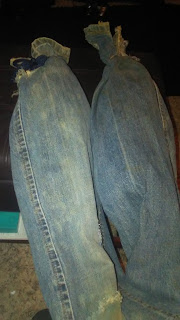 First, I took the pants and I rubber banded the bottoms. After that, I took a two liter bottle and placed one in each leg. For the tops of the legs, you can do the same, I didn't have anymore, so I used a few 20 oz bottles instead. Don't worry how they sit in there, you will have to fix it when you move it to the final spot anyway. 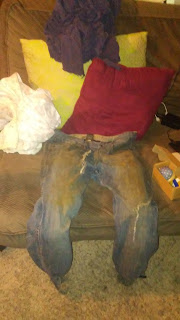 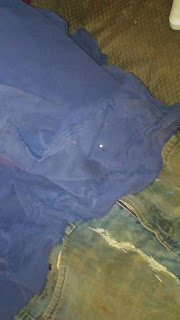 Once it was all secured, I took balled up sheets and stuffed them down inside the neck hole of the hoodie, until I got to my desired thickness. From there, I put more bottles into the arms and attached gloves to the end of the bottle and end of the shirt, essentially attaching them together.

For the face, I had a mask and not much else. I honestly just took a monkey bread pan and two 20 oz bottles and wrapped the mask around them. The face doesn't end up looking so sunk in that way. You an also use a milk jug, pumpkin etc. Like I said, do what works for you! 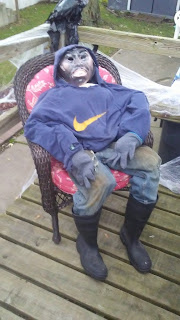 After that, I took him outside and sat him in the seat on the porch. Then grabbed the boots and stuck the pants down in. Once you have the dummy in the right position, fluff and move and make him perfect.

This project was a lot easier than I thought it would be and didn't take very long at all. Try it out and let meknow what you think of it in the comments below!

Thank you so much for reading everyone, Happy Haunting!
Posted by Hunka Hunka Burning Reviews at 4:37 PM