Aren't we all just looking for love? Why is something so attainable seem so far off? So many of us have made the wrong choices in the love department, I can say I have more then a few times. But I finally found the one. I had to let him go for a little while, but then he came back to me. I am not in a foreign land though, I am in America where I feel safe and I know the language. What would you do if you were in a foreign country and felt all alone?

Love Trap, starts off pretty slow. I had to make myself keep reading. When it picks up though, you can really get lost in this book. It really starts to get interesting at maybe the half way point. Before that we are getting the info on all the main characters..but not all the info. By the end of the book, most of the info became clear. 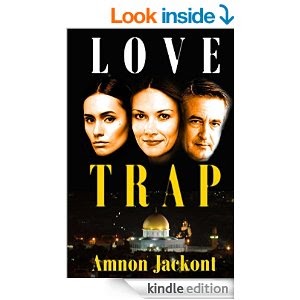 Daphne, is a mom, divorcee, and a doctor. Early in the book, we find out that she made some wrong choices and ended up in prison with her license revoked. That is how she ended up in Israel. A foreign country where she hoped to start over and get her life back. For awhile, it was just her and her daughter. She then puts herself back into a bad situation and takes a crazy job. She was told if she took this job, they would get her license back so she could practice in Israel.

She was apprehensive, but knew she had to take the job. Basically the book follows her through the adventures of work and she meets all the different characters. Tamera, is a woman she works with. Natalie, or Tali, as she liked to be called, falls in love with Tamera. Daphne gets jealous of their relationship because it is not one that she holds with her daughter. In many ways, she is an absentee mom. Letting her daughter do whatever she wanted to and not spending much time with her. You can tell she loves her, but it seems like it is her time to be selfish and think more about herself then her daughter.

Since it had been a long time since her and her husband divorced, she seemed willing to jump in the sack with any guy she got close to. First it was Arnon, which didn't end well. It had been awhile so she should have been satisfied, but the sex with Arnon was just not what she was looking for. After Amos had an accident, they started spending time together. It seems she was obsessed with his mysterious ways just as she was with Arnon. Amos couldn't leave the institute though, so he was easier to "trap" then Arnon.

Gordon, got her to do things that she shouldn't have. Amos already knew that it was her but didn't seem phased by it. He continued to push her away (even though they were having sex) and she continued to fall in love with him. Daphne finds out that Tamera is not trying to kill her and what is wrong with Tamera.

Tamera decided to help Daphne, Natalie, and Amos leave Israel. Before they could get on the plane though Gordon finds them. Their plan is ruined. Amos leaves and they stay, at the end we find out that Tamera did live for years after she thought she would die. By the very end, they saw a picture of Amos on the front page of a newspaper and she was thinking about calling him.

Leaves me wondering, if their situation would have turned out like Jay and I's. I wonder if they finally got together. If he had used her the whole time and never really cared for her then I doubt it. But if there was true love between them, he might be ready finally to settle down and love her. I also wonder if Daphne became a good mom. She wasn't horrible before, but she had a lot of work to do in order to become a good mom.

I enjoyed this book, like I said above, it is slow going for a bit but if you can get past it, then you will really get sucked into the book. I didn't find myself feeling bad for anyone in the book. You don't really get up close and intimate with any of them. Usually, that is a bad thing. With this book though, it seems pretty fitting. You have to know the story line, not crazy details about the people.

Head on over to Amazon by clicking here. You can find out more about the book, see what other people think of the book and buy it for yourself for under $1.

I received this for free in exchange for my honest opinion. All opinions are my own.