Haven is a classified as a short story series. Not the normal short stories that you are thinking of that are only a few pages and then a different author writes a story and so on, but in the literal sense, they are quite short books compared to what I am use to. So I wondered how that would work with the story. If it would hinder it, make it seemed rushed, go too fast, or even unfinished. Another thing that caught my eye in the description was that they are classified as paranormal mystery and fantasy. When I hear paranormal, I automatically think of ghosts. I love ghosts almost as much as I love vampires so I was pretty excited about reading these two books. This series started last year and there are now two books in it. When something turns into a series, you have to believe it is pretty good. 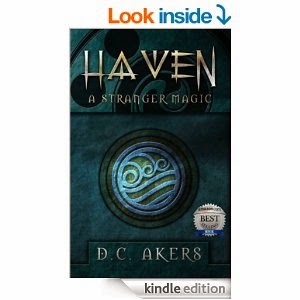 Book 1 is called A Stranger Magic. The first thing I want to say about this book, is the fact that it starts out really slow and doesn't really draw you in at all. It takes many chapters to realize what is going on, but once you get to those chapters, the book is actually really exciting and it does start to draw you into it. You just want to keep reading and find out what is going to happen. Some details have an emphasis put on them and you don't really understand why until way later in the book. The main character in the book is Sam Dalcome. He is a plain kid and early in the book you start to see what he has to go through. Bullying from boys at school and even from his own sister. His sister Sarah is the typical popular girl at first, until you find out how she really feels inside and until you find out what she can do. I never do spoilers on my blog because I want everyone to read the book and find out what they think for themselves, plus I hate when things get ruined for me before I have had a chance to read them. I will say that Sam has some pretty crazy nightmares and he sees some weird things/people. I feel the relationship between him and his best friend is kind of weird, but I guess that is just me forgetting what it was like to be in high school and hanging out with my girl friends all the time. One thing that I find crazy about a lot of books and movies, is the lack of parental guidance or the lack of parents in general. Sam's dad died and Travis' (Sam's best friend) parents died when he was very young. Sam's mom works double shifts to pay the bills and doesn't really make much of an impact on the story. They are basically raising themselves because she is rarely around to provide any real guidance. Sarah found out she has a special power and it involves glass, so it would actually of been nice if mom would have been in the story more to really help her out and let her know what was happening. By the end, you are left wondering what exactly the mom and her kids are, how the father really died and who the stranger in the night really is..but at least you know why he is really there. 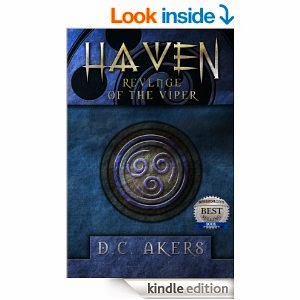 Book 2 is called Revenge of the Viper. This book is much better then the first one. D.C. Akers really got going on this one. There is a lot more action in this one and it is much more vivid in detail then the other book. Sam goes deep inside himself in this book and he comes out stronger in this one then he did in the first book. Sam finds out about his dark family secret and the fact that his mother is running for not only her life but for the life of her kids. Sarah takes a bigger part in this book as she learns more about her abilities. There are a lot more characters introduced in this book, but it is steady with developing the characters from the first book so you really get to learn more about them and who they are as a person. Sam snooped around and found things that should have never been found, by doing that he unknowingly put them in contact with the danger they had been running from. In the first book I was unhappy that the mother didn't have a bigger role in the story but that was made up for in the second book.

These books are definitely for young adults/teens. Anyone who loves Twilight and Harry Potter type books, will most likely love this series. Book one starts off slow but if you stick it out, you will really get into it and the second book is even better then the first one so it is worth it to stick it out just so you can get to the second one. Like I mentioned earlier I don't do spoilers, so I know that these are vague descriptions of the two books. If you want to know what other people think of these books or find out more about the story then head over to Amazon. You can find the first book here, the second book here, and the collection can be located here. Right now, you can get the first book for free so you have the chance to find out what it is all about risk free.

I received one or more of the products mentioned above for free using Tomoson.com. Regardless, I only recommend products or services I use personally and believe will be good for my readers.
Posted by Hunka Hunka Burning Reviews at 6:38 PM