Every now and then everyone needs a little help. Mother nature and men are included in this theory. They don't always like to admit it but men sometimes need more of a shove in certain departments. As they start to age, it sometimes starts to take a toll on their energy and their want of all things sexual. I have been married almost  4 years now and I am starting to see why older women complain that after their husband or boyfriend work all day, they come home and want to relax instead of getting busy. Now I never thought of my husband and I as old but we certainly are not as young as we use to be. Our bodies have taken a beating and are really starting to show their age. At night it seems we have turned into an old married couple. Looking forward to going to bed an just sleeping. Well at least my working husband looks forward to it, if it were up to me we would be getting it on from the time he got home until it was time for bed. That though is neither logical or practical as I said we are getting too old to be doing all that haha.

Seriously though, for the last few months I had been thinking it was me. I have put on weight since we started dating. A nice little side effect of the many medications I was put on. My self esteem is not the best anyway so I kept asking if it was me and he denied it every time. So I started googling what could be wrong every time I felt it was my fault. I learned that it is natural as a man gets older to start losing that drive and desire. I also found out that it could be that he really is exhausted from a long day at work, so I shouldn't get too upset with myself. Either way I can't go without long so I as I was googling I was also looking up different all natural products that he could take that would assist in this situation. I saw many but none really had a large amount of success stories so when I saw the listing on Tomoson for Herbal T I knew that I had to apply. Anything that would help would really make me happy. 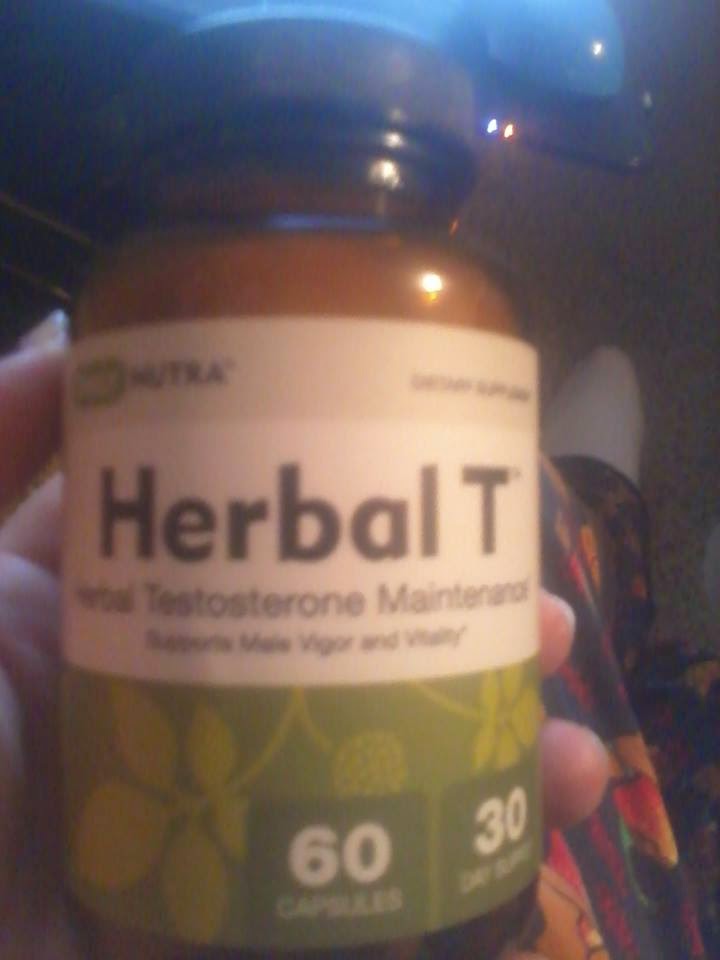 When it came in the mail I was excited but my husband..not so much. He felt that he didn't need help in this particular department. I swear he thought it was Viagra or something. After explaining to him exactly what the product was and how it would help he started to come around. Basically this product has a few functions:

Energy and Focus-which helps with his memory, anti stress and helps to keep him going and awake

So not only is Herbal T good for the bedroom, it is good for his body and mind as well. He really understood at that point, that it wasn't just about the sex, it was about him as well.

They say that they take about thirty days of continued use to really see an improvement so the first week or so he was just taking his 2 a day with a big glass of water and not much to show for it. Towards the end of the month though I was noticing a subtle change in him. He wasn't so grumpy or as tired anymore and he was in the mood again. That made me really happy of course. He didn't really like the taste or the smell of them and at first he really wasn't into it but by the time the bottle was gone I think he finally understood that the problem really was inside of him and not me as I had originally thought.

Now I don't feel bad about myself, although I could still stand to loss 10 well maybe more like 50 pounds ( but who is counting right lol) and he may even want it more. But if your man is having this problem or a similar problem then I say try this out on him and see if testosterone really is to blame. I mean anything with an ingredient called Horny Goat Weed has to do something for you right?? I really recommend this to all the guys out there that are feeling sluggish or that have lost their desire or longevity in the sexual department. It worked for my husband and it can work for you as well! If you would like to check it out on Amazon and see what others have to say about the product or order it for yourself just click here and find out all the information on this awesome product! I received one or more of the products mentioned above for free using Tomoson.com. Regardless, I only recommend products or services I use personally and believe will be good for my readers.
Posted by Hunka Hunka Burning Reviews at 9:40 PM