Some people decide to have children and some people get surprised by a bundle of joy. Nothing compares to using a home pregnancy test and getting a postive result. There is another test though that might come close to the hpt. This test is called a baby gender test. These tests are suppose to tell you whether you are having a boy or a girl. They say just for fun on them but I have heard of a few women who swear by them and say that they have always been correct at predicting exactly what gender of baby you will have. Pregnancy takes a long time and a lot of patience. There are many stresses that come along with being pregnant so maybe this is what women need to relieve the stress for a little while. One day maybe you are bored and pregnant and you decide you want to know what your going to have so you go to Amazon and click here and up pops the Momma Bear baby gender test. If you want to have a fun moment and just try out something silly you order it. The reviews on the Amazon page I have seen are from people who obviously didn't read that this is for entertainment purposes only and have given it bad reviews. I personally knew that it was just for fun and that it would have a 50/50 chance of being right. No products like these are going to be a for sure thing so I hope no one runs out and gets everything for whatever gender it said it was going to be. With that being said, let's go on to the product itself. 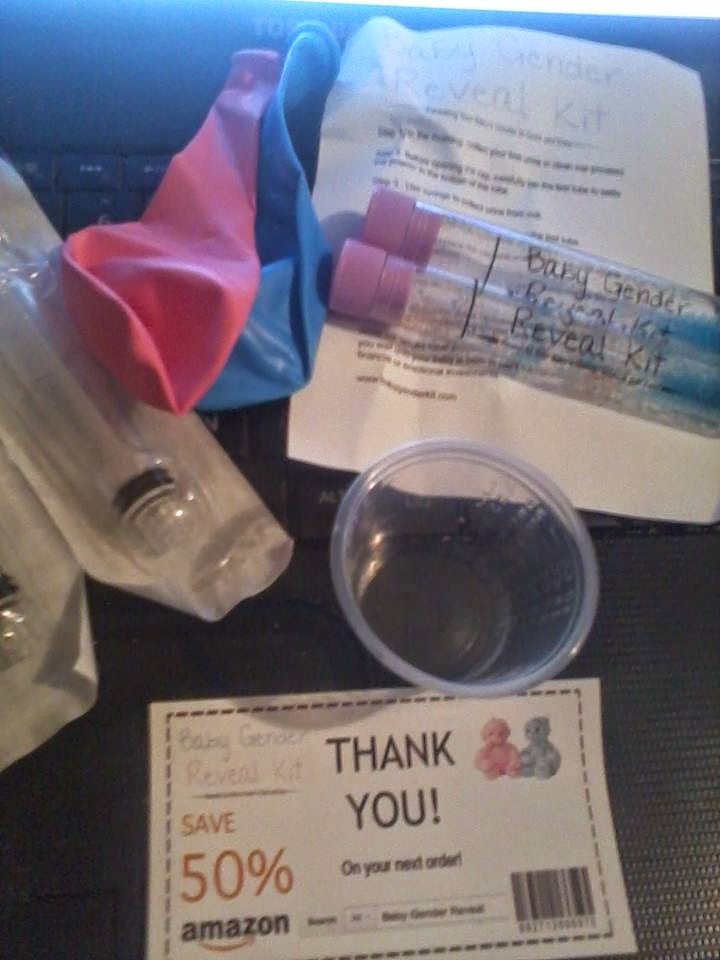 When I first got it in the mail before I opened it, I wasn't sure what sort of thing to expect. The company sent it straight to me so I didn't really have the chance to go to the Amazon page and check it out like I usually do while I am ordering something. I liked the idea that the whole thing was a big surprise to me.

When I got the package and opened it up, I have to say that my first reaction and the reaction that I am still having with this, is that it looks like a kid's science fair project and I had a real problem taking it seriously. It comes with two tests in it, so you could take them both and see if the results are the same, or you could share it with another woman who is pregnant. The set includes, a "cup" which looks like one of those cups for liquid medicine, to pee in, 2 syringes that will extract the urine from the cup, 2 balloons-purely for celebrating purposes, 2 test tubes-they come with what I originally thought was glitter on the inside but from what I have read and from really looking at them, they are some sort of crystals, a card that explains the results, coupon, and of course instructions.

It is fairly self explainatory, you go in the cup, extract the urine with a syringe (of course they have no needles on them), then you smack the test tube a few times onto a counter or other hard surface to get most of the crystals down to the bottom (they will settle while being shipped so it is not possible to get it all down to the bottom without sticking something into the test tube, which I don't recommend because it may mess up your results), then you open the test tube (a lot harder then it looks and not just because I have arthritis. I had to sit down my syringe and then wriggle the to off and even had to use my fingers to pry the last little bit apart so that it would come off!) and you squirt the urine into the tube. Make sure you have filled up almost the whole cup or at least a good bit of it because I had to fill the syringe 2 or 3 times to get it to the fill line on the test tube. My cup was full and when I was done I had a little less then half a cup. Anyway, once you get it up to the clearly marked fill line, put the cap back on and make sure it is tight and then shake it until all the crystals have dissolved. Once you have all that accomplished it should look be either green or purple. Green is suppose to be for a boy and purple for a girl.This is my result: 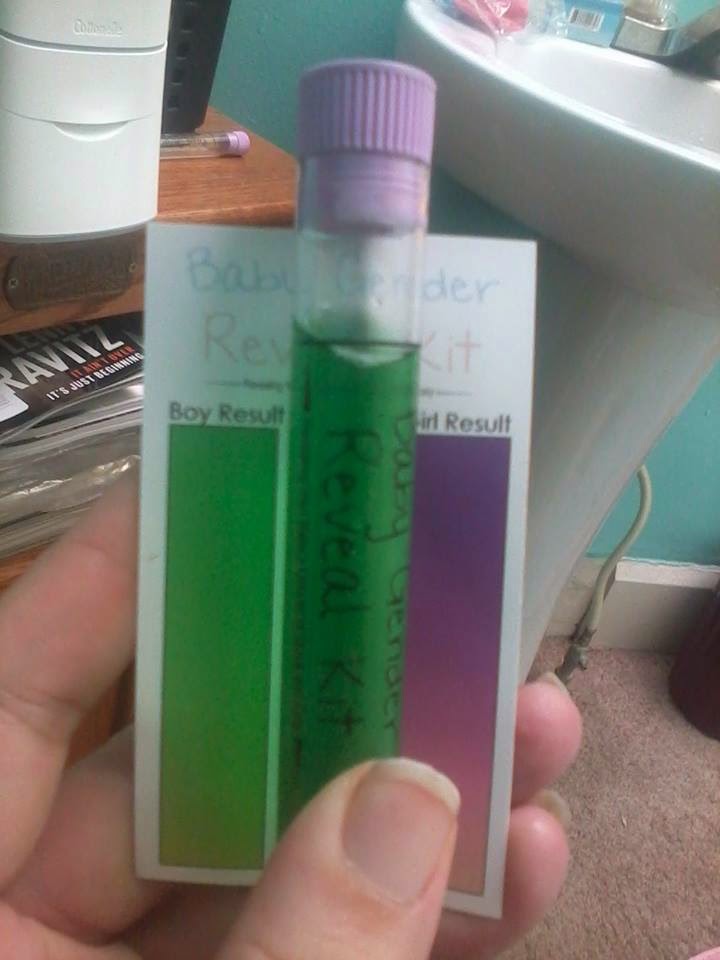 In my case I didn't have to shake it because it was already green when I got done putting all the urine in the tube, but I did anyway just to make sure that it wasn't going to change on me and give me a surprise. I then let it sit for a second just to make doubly sure that it was going to stay green and took out the card with the results. I then found out that it said I was going to have a boy. I have to be honest though, I do not know right now if I am even pregnant. All signs point to the fact that I am and with these signs and symptoms, people have been telling me that they think I am having a boy, if I am indeed pregnant. This is what my husband and I want as well but there was no way that the test could be influenced in anyway so I feel safe in saying that the test came up with the result all on its own with a little help from my urine. If I am pregnant though I will still make sure to find out what the dr and the ultrasound say because like I said before this test is just for fun and only a 50% chance of picking the right gender.

I can really see how a pregnant woman would enjoy this product. It really gave me a few smiles from the unveiling of the product to the unveiling of the results. It is easy to use and had very clear instructions that come with it so no one could really do this wrong in my opinion. With that said, women's hormones are out of control while they are pregnant and I can see something like this causing stress overload if a woman got a result that she was not happy with or if she really took it seriously. If you know you are having a girl, the doctor says girl and the ultrasound says girl (eventhough both can be wrong from time to time) and the test says you are having a boy, don't assume that the drs were wrong. Just remind your self that it is all for fun and sometimes it comes out right and sometimes it comes out wrong. No need to stress just enjoy the few minutes it takes to do this test, because while you are doing them you are care free and the stresses slide away while you are focused on something else for a little bit.

I say if you want to have a bit of fun and try to ease your mind for a little bit, this product is for you! It's not a for sure thing, but its not going to hurt you either, unless you have your heart set on one or the other and the test tells you otherwise! I think this would be fun for doing at a baby shower to see what the result would be for the guest of honor or just for a friend that believes in this sort of thing. You can never go wrong if you can put a smile on the face of a pregnant woman!


I received one or more of the products mentioned above for free using Tomoson.com. Regardless, I only recommend products or services I use personally and believe will be good for my readers.
Posted by Hunka Hunka Burning Reviews at 1:23 AM