Sleep is something that eludes me almost every single night! I could not imagine falling asleep and staying asleep all night anymore. I have tried some of those popular sleep pills. Some because they were free and some because they were cheap. I have to say that up until now I have always gotten then 88 cent ones from Walmart.. There are only 8 of them but I don't use every day! Anything that is all natural, I was taught to stay away from because my daddy said it would not work. So I  can honestly say that this is the first time I have ever used an all-natural pill. Is that sad? I had a very sheltered upbringing and they did many "weird" things as others call them! I can see that now looking back but then it was just normal!

So when I got the chance to review this all-natural pill I jumped at the chance! It's not something that I would ever buy in a store and I am always..ALWAYS, having trouble with sleep. Most night, I can't stay asleep and wake up every hour or two all night long. Other night, you lay in your bed and just think about things and imagine every possible cause and effect situation there is before you make a final decision. I already have fibro and wake up feeling like I haven't slept in days so this on top of it sucks! Anyone else have a healthh problem that involves  your sleep and you can"t escape from it? 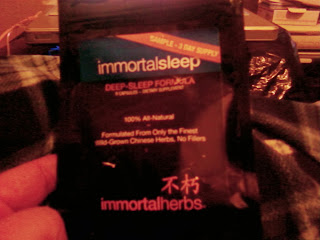 When sleep may be involved I will try anything! My husband, childhood friend, and I all tried this product for two days. not two days in a row but two different days. Here are the first day reviews.

My 1st day review--
I thought that since they were all natural, they would do nothing for me. I decided to try it out any way and about 15 minutes after trying these with water and only candy in my tummy, I started feeling weird!  Weird like I just took a random pill or weird like I just smoked a whole joint all by myself. Says give it half an hour to work but after fifteen minutes I was falling asleep in my chair at the lap top! I decide then that it was night night time. I gotta admit I kind of felt like I had been out bar hopping all night. You know that feeling you get where the room is not spinning but your head just feels weird when you lay it down? Yeah that was the feeling that I got. It didn't take long and I was drifting off to sleep. I'm not going to lie, I didn't expect the product o work when I was trying it like I said earlier but it worked better that first day then I expected! Instead of waking up every hour I was sleep about 3 hours which in my book is better. But when you take sleeping pills you expect to be out all night, and like I said I was not. The next day I was groggy like a zombie. It took me hours to wake up and I just wanted to lay back down but I had a busy day and couldn't. The package clearly says no groggy feeling the next day but I guess that part didn't work for me. All and all a pretty good first try except for the zombie like feeling the next day!

Brad's 1st day review--
Brad said that about ten minutes after he took these he had an intense urge to fall asleep. He also felt as if he was "on something" as he reached the time that he fell asleep. Sleep came right away which he said is "unusual" for him. Usually it takes about half an hour and with these it was mere minutes! Not only was he out like a light very quickly, he said he slept all night and it was a very heavy deep sleep. Best sleep in a long time by a long shot,he said. He wanted to use the pills that very night but I convinced him to wait a day and see how he felt about them then. He was not in a zombie like state and looked very awake, mere minutes after waking up for the day. Brad wants everyone to try these and he will be looking for them to try them again. (What an awesome review after only the first day of trying them!)

My Hubby's 1st day review--
When it comes to energy products or sleep products, my husband wants to try them all out and he loves when I get them free in the mail. The all natural ones though, he usually does not try out and they sit on the shelf until I have a brave friend come over and try them. These though, after he heard what our reviews were, these he wanted to try even though they were all natural. He was too scared to try them the day that we both tried them. So the second night of trying them he did them as well. He works thirds so he took his during the day, but that is his night, and we took our second round that night. Jay is amazing with pills, he can take them right down and doesn't need much in the way of food being in his belly before hand or getting it in there afterwards. I handed them to him before he got into the shower. I figured if he woke up a little bit, he would give a more honest review. So he was showering away and got to feeling that "high" that we spoke about and was in and out of the shower in about 5 to 10 minutes when it usually takes him 20 to 30! Before I knew it he was undressed and in bed. I decided to lay down beside him for a few hours. When I got up he was still snoring away. Work time came quickly and he was not grouchy when I woke him up like normal. He said he felt refreshed and awake and ready to take on the day. No zombie feeling there either. He fell asleep fast as well but this dude could fall asleep anywhere! He also wanted to take his second try out the next day and I had to stop him from doing it as well! Jay says "Everyone needs to try these out! Even though they are all-natural they really have worked for me so far! I can't wait to take my second dose!

After the first dose of them, it seems that we were in agreement that these pills really do work. They work better on some then on others but you will have that with every single thing that you review, try out, or read up on if you are interested in trying it out. We were all excited for the second trial and I was hoping to not end up like a zombie again! The second round reviews go a little something like this:

On dose 2 I found that there was no noticeable difference and that they lasting affect was an hour or less.It was a normal night of ups and downs for me. It did work the first time but not the second, I don't get it. It was a little disappointing to have had one extreme and then the next all with the same dose but completely opposite affects. Just a little weird if you ask me but everyones experiences will very!

Brad however was was happy again as it seemed to help him sleep well, My hubby felt the same as Brad, they both found the dose worked well for them and helped them sleep soundly throughout the night. They felt no difference between dose one and two and both felt great after waking none of the tired groggy feelings they have been so used to!

In conclusion I personally would not use this product again as it did not work for me, However Brad and my hubby would definitely use it again and they would also recommend it to all their friends and co-workers looking for a little help to get a good nights sleep!!!


I received one or more of the products mentioned above for free using <a href="http://www.tomoson.com/?code=BOTTOM91bbc98bc93256b5c5d59fe25c8d6f4b" rel="nofollow">Tomoson.com</a>. Regardless, I only recommend products or services I use personally and believe will be good for my readers.

Posted by Hunka Hunka Burning Reviews at 1:28 PM No comments: