Surprise freebies are by far my favorite freebies. When you sign up to get a huge box of stuff but you don't know what's in the box until it arrives at your house. Unless someone ruins it by posting a picture online. When I signed up for the "My box of Joy" from the Post office, I couldn't get anyone to tell me what was in the box. They all said it was silly normal freebie stuff so I wasn't expecting much when it came in the mail. The first thing that saw and grabbed was the coconut water. I am not a fan of coconut and have never had any sort of coconut water before but I decided what the hey I will try it for the fun of it.

I only took one sip and that was enough for me. This stuff tasted like watered down yoo hoo. Let's be honest here, no one wants to drink a watered down yoo hoo. I was hoping the chocolate flavor would drown out the coconut flavor. Which I must say it did marvelously. I don't remember even tasting any coconut at all. But I just don't understand the concept of it I guess. I mean if you want water...just drink some water. 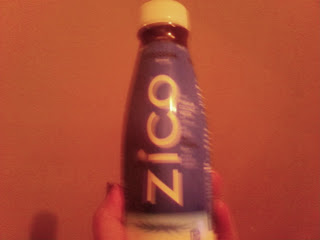 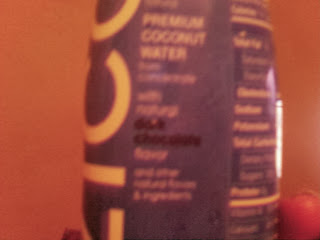 I know that someone is going to say "But what about the health benefits?" Well I have yet to look this up but I have heard  that this is supposed to keep you hydrated longer then water. I'm not sure how that is and it's pretty interesting so I am for sure going to look it up and see if it's true. Not that it really matters to my family though, none of us drink or really eat anything coconut. But if you are health conscious and like the taste of  coconut water, I say try this out! You just may like the taste of it and it could be something that you trade colas for in the long run!
Posted by Hunka Hunka Burning Reviews at 5:03 AM