When it comes to the smell of your house, it is a given that someone would want their home to smell amazing. There are so many different air fresheners out there, many that do not leave a good smell in your home. Why are they so expensive? You have to take out a loan just to be able to buy a few for your home. Ok so maybe they don't cost that much but they are very costly. I never understood why either. People don't have to buy it for their home, and maybe if they stopped buying them so willingly, the prices may come down so they would be affordable. For something that is going to be at the forefront they sure are ugly as well! I'm not sure about anyone else but when I walk into a house and smell a good smell, I want to see where that smell is coming from and what the freshener looks like. If the freshener is not appealing then it is not going to make the user want to reccomend it. The point of buying things is to tell others about it so that they can buy one for themselves as well. If people don't want to admit where they got something then the product is not going to sell very well.

Glade is always doing instant wins and giveaways and I never have any luck at winning anything. But the last day of October I was able to score one and it just came! When I was playing the game I thought it was going to be a tiny little air freshener that may only work for a few days. But I was very surprised when I opened the box and saw that this was not a small freshener. It's a lot bigger then usual ones and has to be upright to work. Our apartment has a shortage of plug ins and many of them are sideways. I knew what room I wanted it to go in I just wasn't sure what plug in I could fit it in to.

When I thought it was a small air freshener I had a great idea on where to put it. But as I said when I opened the box I noticed that it was HUGE! This thing takes up the space of two plug ins and the cover on it is humongous by itsself.! I wasn't sure how much electricity this thing would use either!

I went to take it out of the package and it was not easy to get out of the package but it wasn't hard either. The plastic sides pulled right apart once I got my big fingers in there and then it snapped right back together. It was just loud enough to where they should not be able to be stolen in stores. I took it out and then I read the package. This is a cool new starter kit that I get to try out before other people! I also noticed that it said Apple Cinnamon and Lavendar Peach. Thinking that it just uses one smell and then they threw in an extra smell, I was happy as could be! Until I looked at the bottom of the package and read that both the bottles go in at the same time and the scents switch out daily! After I read that I fell in love with this air freshener! I never thought that I would enjoy having different smells on different days.

As soon as I plugged it into the wall the room started to fill up with the apple cinnamon smell. After only a few minutes my head was already pounding. Anytime I start a new scent it is way too overwhelming and I end up with a migraine after only a few minutes. Does this happen to anyone else? I wish I could just smell stuff without having the familiar problem. The sickening smell only lasts for about an hour though and then it starts to blend in with the rest of the smells of the room. 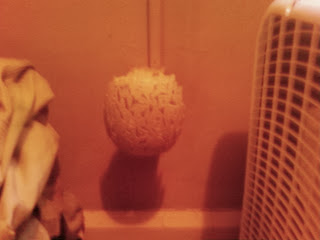 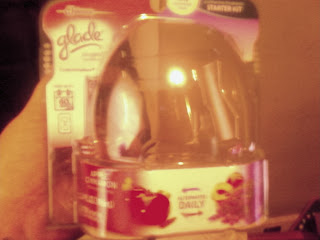 I enjoyed the smell after I got use to it and the next day the headache was back for a little bit but it was ok because I know in a day or so I will be used to it and the house is going to smell so much better then it did before. The scents are suppose to last thirty days and if these things aren't too outrageous, we will for sure be picking up a few more for the house. I reccomend this to anyone who likes having different smells but is too lazy to buy different scents or too lazy to change them every day. This is perfect for you, just put it in, leave it and forget it until you stop smelling it!
Posted by Hunka Hunka Burning Reviews at 7:23 AM