Men can smell in many different ways sometimes good and you just want to cuddle with them and sometimes you think a skunk would smell better then they do. On those days all you want is for them to take a shower and put on some good smelling deodorant and come and climb into bed beside you.  Jumping straight into a shower is not always the easiest thing for anyone to do. So we rely on their deodorant to make it so we want to be around them.

For the last 6 years I have known my husband he has used the same deodorant. Same smell, same brand, same size. Everything was the same, I noticed that it always worked no matter what kind of situation he was in and I had to learn more about this miracle! 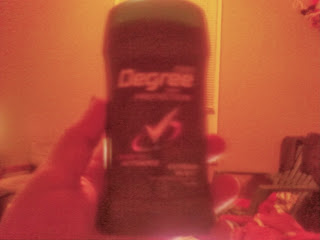 The kind he uses is called Extreme Blast and it has an amazing cologne smell to it when you stick it close to your nose. It is body heat activated,so when he gets to working and sweating, it gets to working and covering up his sweat. He puts it on a few times here at home and then he keeps a stick in his locker and applies it at work a few times. I have gotten so use to the smell that I often mistake it for cologne.

It works very well. None of his shirts ever have sweat stains for me to remove so laundry is much easier as well. Also the smell sticks to his shirt long after he has taken them off. If you get too close to them you can tell they are work clothes so you don't sniff too close or you will regret it.

I say anyone with a stinky man in their life needs to get this for them because they no longer smell like stinky men anymore. This stuff is cheap but does work and worth every penny that you will pay for it. Most importantly your laundry will thank you by being so much easier to get clean.
Posted by Hunka Hunka Burning Reviews at 10:28 PM