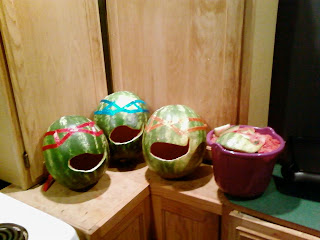 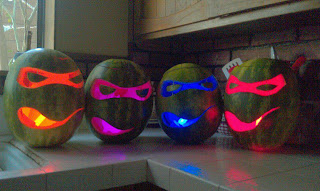 Halloween is my favorite holiday and especially when I can make things all for free! I got free watermelons from a local food bank, before I could tell my husband not to eat them he had his dad stop and take one to him at work where they all devoured the poor watermelon lol So with only 3 watermelons left I asked my husband what his 3 favorite Ninja turtle characters were (well I asked what colors they were specifically lol) and set out to making them for him. I cut open the tops and used an ice cream scoop to get the insides out. Then when they were all cleaned out I made mouths with one of my knives. I then took ribbon that I had just gotten for free (The irony lol) from Smiley360 and made the masks. I used glue which also came free from Smiley360 and glued them on and tied them in the back. I then put the corresponding colors of glow sticks in their mouths and stuck them outside with the guts and outside leftovers of the others. So when people asked I said the last one commited turtle suicide, I even had  a toy gun lying there and had all the other watermelons positioned around the one lol This was my favorite thing to do for Halloween since I was small enough to go trick or treating. The top pic are the ones I did and the bottom pic is where I got the idea so thank you whoever did it first and put a pic up on internet lol